See, lately, we've been working on a bunch of grown-up shtuff around this house. The biggest one is buying and selling houses. I mentioned in a previous post what has facilitated this move, but basically we're moving from the southwest side of Lincoln to the east/southeast side. We also are (finally) working on will and end-of-life stuff. Once you have a kid, that gets real.

So, nevertheless, I'm a day late from where I want to be. I thought about waiting another week, but the subject matter for this week's blog has been bouncing around in my head for awhile. This is also one of the least formed ideas I've ever had before starting. There've been a ton of ideas that have floated around for this, so it's kind of setting out on the journey and see where it goes. Join me.

We're talking about self-realization, really. I'm sure that people come to their great, grand realizations about themselves much younger than 38. Or maybe they don't. I don't know. I haven't had in-depth conversations with many people about that.

I'm an extrovert. Most of you won't be surprised to find that out. I thrive and feel renewed spending time with people. Keya even knows that I'm kind of extreme to that end. I rarely miss an opportunity to spend time with family or friends, either at home or out. I'll do about anything.

When I lived in Colorado, the group of friends that we built up, the "Pint Night" crew if you will, would often make plans starting about 2 on a Saturday afternoon and a dozen of us would be at someone's house by 8 that evening, usually playing video games and drinking adult beverages, just having a great time. It was great for my extroversion.

Being an extrovert, however, does not mean that I don't love time alone. I do. It's just not recharging the way it is for me to be out with friends. When it comes to my family of origin, Dad and I are both very much extroverted where Jay and Mom are much more introverts. I know that's hard to believe, but when you see my mom and brother's studios, you'd understand.

Huh. Verb agreement is problematic in this piece. Honestly, don't care. Moving on.

Okay, so I've always known I'm an extrovert, but it was in the last couple of years before Everett came along that I realized how extreme it is. I would have company over every night. I like being the host. I'm fortunate to have a wife who feels the same. It also helps that we were the first of our closest friends to have kids and are willing to host... after Everett's asleep.

Okay, so anyway, I could probably mention the catalyst for this train of thought and thus this particular blog post. My 20th high school reunion was a couple weeks ago. The best part, far and away, was catching up with Kelsey and Todd, who I don't see as much as I'd like, and Alex and Angela. I could write a whole post on my friendship with Alex. I am so blessed to have been part of their wedding.

However, I found myself bouncing around like a damn hummingbird all night. While I did feel a little guilty leaving Keya while I flitted off to go talk to people who I, literally, might only see at the reunions. It was ridiculous, I'll admit, but I had a great time.

Why was this the catalyst for the blog? Well, I've often said I wasn't cool or popular in high school. I still stand by that I wasn't cool. I never have been. I never plan to be. I remember a conversation with another Todd in his kitchen where I told the story of when I thought I was cool, but the story ends with me crying. That's all of the story I remember. I don't know what I did that made me feel cool....

Anyway, I have to stop saying I wasn't popular. I know this sounds like a humble brag, I don't mean for it to be, I don't, but it definitely was something of an aha moment. Why have I never thought of myself as popular? Well, simply because pop culture tells us that cool and popular go hand-in-hand. I wasn't the stereotypical popular kid because I wasn't up-to-date on fashion and I was terrible at making the right joke or saying the right thing at the right time. However, in a class of 400 or so people, I made nice with about everybody. I was picked on by a couple kids, but I also avoided those who made my life painful.

So, from that point, a lot of my self-esteem has been based around having a LOT of friends. I've always felt like they were good friends. Yes, there are ancillary people who I hang with when I hang with friends (or see at Spikes at this point), but I feel like I do a better than okay job of having a fairly large circle of good friends. I don't buy the idea that by the time you're 40 you have, like, three friends. Of course, with the parents I grew up with, that was not the role modeling I saw.

The hardest realization in my life, which is not that recent, is that sometimes I'm a terrible friend. I won't go real deep, but two of my closest friends, Dave Harbaugh (DAVID DAY HARBAUGH THE EYE VEE!) and Alana (Gay) Gowin have been on the receiving end of my terrible friendship. Fortunately, they're also possibly the two most gracious people I know and I'm doing better about being a friend, even if it's from another time zone. I hope they both read this so that I can say I'm truly sorry for the times I took you for granted. Yes, I realize how impersonal this might be, but I'm also terrible with having real, meaningful conversations.

Finally (YAY!), this was brought up by this picture: 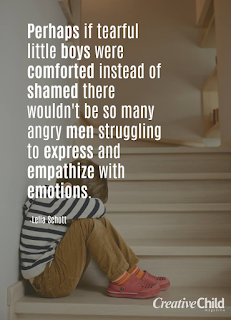 When I was little, I was a crier. Man was I a crier. The last time I remember crying as a kid was in sixth grade. It was because I thought I lost my lunch box. It had gotten knocked around the corner, not stolen/lost. I don't remember my friends shaming me for that, but I decided I shouldn't cry. Boys don't. Sadly, that mindset has held to this day. I still don't cry in front of people, even my wife.

Thanks for sticking this one out with me. I realize this was maybe even more stream-of-consciousness than usual. I appreciate those of you who are reading.