Oof. I didn't mean to take this long. Frankly, a lot has happened. In short, when I last posted, I was teaching at Dorchester, though no longer coaching, we were looking at places out west of Lincoln a little bit, and life was... settling in.

Now, I'll be teaching 4th grade at Weeping Water Public Schools next year, and coaching volleyball. We are, tonight, working on putting together an offer for a house on the east side of Lincoln. Life's changing. I've another honesty post in my head, but I'm not there yet.

Anyway, awhile back, I mentioned that I wanted to talk about our adventures with traveling with Everett. At the time of the travel, Everett was 16 months old. We decided, possibly erroneously, to take him on his first flight. Out of the country. Yeah. He'll now think that flying always involves customs.

A little bit about Everett. He's really the chillest baby I've ever been around. I know every parent thinks their kid is the best, so hopefully by acknowledging that you'll take this with the grain of salt with which it can be (should be?) taken, but even daycare talks about how chill he is.

Nevertheless, we've probably all got a horror story from a kid on a flight. I am so hyper-aware of how others perceive me that I don't want to be the parent of that kid.

Add to that the fact that Everett was coming off an ear infection. Let's do the math. Pressure changes are already a pain for kids. Add in the possibility of still-infected ears... I was nervous.

We flew from Omaha. We scheduled it in such a way that we hoped he'd nap for the better part of at least one of the flights, either Omaha to Chicago, or Chicago to Toronto.

He was awake the entire flight from Omaha to Chicago. It was actually wonderful because a couple of people in the row ahead of us got moved up, so Everett and I jumped up there for part of the flight. It allowed me to get this picture, which is one of my all-time favorite pictures of him. 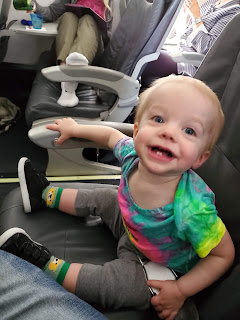 I put him in the seat next to me and strapped him in. He loved it. Quick pause. Yes, he's absolutely adorable. He takes after his mother. ANYWAY, he loved the first flight. He didn't fall asleep until we were on the ground in Chicago. Thankfully, O'Hare can be a long damn taxi. It was, so he got a decent nap.

He loved the airport in Chicago. He loved the people and spent a good part of the time just staring out the window at the airplanes (taking after his dad!). He made friends, and ate, and just generally did great. He really was a rockstar.

The flight to Toronto was completely full. He had to sit on our laps. He rocked it again. This time, he fell asleep on final approach into the airport, slept through taxi (Pearson Airport in Toronto is huge, too) and even through Keya trying to track down his car seat (which was at baggage claim, something we'd been told wouldn't happen). All told, he got a good nap.

We visited the CN Tower. Everett loved it. We saw the aquarium. Everett explored a playground for the first time. He rocked the time in Toronto.

The trip back could've been eventful. April 10, 2019 was a bomb cyclone redux in Denver, the city we were scheduled to fly through on the way back to Omaha. Someday, I'll commit a blog to singing the praises of United Airlines for the overall way they handled our situation. Yes. United did a phenomenal job. I already reached out to UAL to let them know. Folks, if a business goes above and beyond, PLEASE tell them. When I was a retail manager, it was so uncommon when people told me about my staff going above and beyond, but when it did, it made everyone's day.

So anyway, after we did some finagling, we were on a flight that left Toronto at 2:20 in the afternoon. This is better than two hours after Everett normally takes his nap. We discovered that when he doesn't get his nap on time, he gets straight manic. And I don't use that phrase lightly. I really mean he's out of control happy.

There was a man working on his laptop. He was incredibly gracious with our son from time-to-time sprinting up to him and then screaming in joy! Over and over. I'm sure when our flight's gate was changed, he breathed a sigh of relief.

Everett's other jam while we were at the first gate was sprinting away from us and then running through the wheelchairs that were stored nearby.

After the gate change, Everett's favorite game was to screech and run away about 10 feet then turn around and screech again. He wasn't obnoxious. He didn't really disrupt anyone, but we couldn't get him to settle down. Needless to say, we were TERRIFIED he wouldn't sleep.

The flight from Toronto to Omaha (yes, it was direct. more on that later) is just a little over two hours. Everett slept for about an hour and a half of it. We landed about four Omaha time.

Some of y'all are waiting for the other shoe to drop. We were, too. It never did. I get being frustrated, pissed even, that it never happened. We were, for obvious reasons, thrilled.

I don't know if I've said this before, but I've been incredibly blessed in this life. Our son is an example of how kids get younger siblings. He will, at some point, no we're not pregnant right meow, have a sibling.

He'd always traveled beautifully when driving places. We never imagined that he'd travel so well by air. Sorry if you're disappointed that it wasn't the greatest stressor in our lives this year. I'm sure there are a lot people who can identify, though. Sorry, too, if I'm not the type of husband or dad who falsely commiserates. I'm not going to pretend that my life is tough. I love my wife, my son, and my life.

Maybe, just maybe, my next post will be more controversial. Maybe I'll get folk riled up. Maybe not. I don't have a theme for this blog.

Soon, you'll learn more about how to Ty One On.